The text of Alone is taken from Edgar Allan Poe’s poem of the same title, written in 1829 when he was twenty years old. When I first came across this poem, I was attracted to the evolution of the narrator’s reflections. What begins as a lonely description of childhood morphs into a dark, haunted memory, and the narrator grows more crazed as he recounts the story. I sought to capture the narrator’s transformation in my music, suggesting that the narrator is deranged the entire time, but only reveals his insanity bit by bit. The piano gesture at the beginning is hauntingly sweet and grows more complex as the singer becomes crazier. The return of the opening material toward the end of the piece is, to me, the spookiest moment of all, for the sweet music is so out of place that one cannot help but conclude that the singer has lost all sense of sanity.

Alone (1829)
From childhood’s hour I have not been
As others were—I have not seen
As others saw—I could not bring
My passions from a common spring.
From the same source I have not taken
My sorrow; I could not awaken
My heart to joy at the same tone;
And all I lov’d, I lov’d alone.
Then—in my childhood—in the dawn
Of a most stormy life—was drawn
​From ev’ry depth of good and ill
The mystery which binds me still:
From the torrent, or the fountain,
From the red cliff of the mountain,
From the sun that ‘round me roll’d
In its autumn tint of gold—
From the lightning in the sky
As it pass’d me flying by--
From the thunder and the storm,
And the cloud that took the form
(When the rest of Heaven was blue)
Of a demon in my view.
Alone is published in the NewMusicShelf Anthology of New Music for Baritone, Vol. 1, curated by Michael Kelly, 2018, available for purchase here. 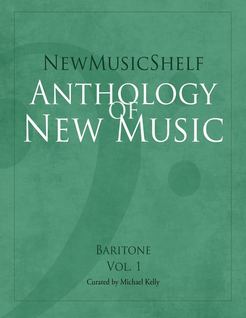